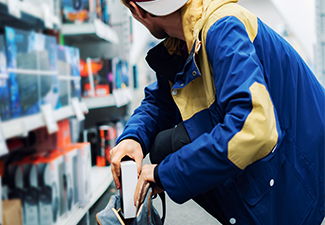 Some may consider shoplifting to be a minor crime, but Florida takes shoplifting quite seriously. In 2020, there were 67,135 reported shoplifting cases throughout the state.

Even a conviction for a misdemeanor involving probation and community service will result in a criminal record that can follow you your entire life. And as the value of the theft increases - or the number of times an individual is caught - so do the penalties. You could eventually end up facing felony charges and real time behind bars.

If you are under investigation for, or have been charged with, shoplifting in or around Daytona Beach, Florida, contact a theft attorney at DaytonaDefense.com.

Our lead attorney, Jeff Higgins, served as an assistant public defender before starting his private criminal defense practice. He knows the local officials and the court system and will fight vigorously for your rights. The quicker you get DaytonaDefense.com on your case, the better the chances are that we can get you a favorable outcome, including perhaps even a dismissal of charges before trial.

We are proud to serve clients in Daytona Beach, as well as in DeLand, Orange City, Ormond Beach, Port Orange, New Smyrna Beach, Palm Coast, and the counties of Volusia and Flagler.

According to Florida Statute Section 812.015(1)(d), shoplifting—also called “retail theft” in Florida—means “taking possession of or carrying away of merchandise, property, money, or negotiable documents; altering or removing a label, universal product code, or price tag; transferring merchandise from one container to another; or removing a shopping cart, with intent to deprive the merchant of possession, use, benefit, or full retail value.”

In other words, you don’t have to walk out of a store with goods in your pocket, or load up a cart and speed through the exit. Misusing a self-scanner or self-checkout station is a frequent scenario that results in shoplifting or petit theft charges. Even switching price tags or putting something of higher value in a container for something of lower value is considered shoplifting. Even if you show the store that you have the ability to pay, most establishments will still press charges.

Florida goes on to distinguish between petit theft (commonly referred to as petty theft) and grand theft, determined by the value of the goods stolen. In general terms, any theft involving merchandise valued up to $750 is considered petit theft, anything above $750 grand theft.

Classification of Shoplifting in Florida and Possible Penalties

Even within the two broad categories of petit theft and grand theft are subcategories – based on value of goods stolen – that carry increasingly stiffer potential penalties as the value rises.

Petit theft is considered a misdemeanor, but it can rise to third-degree felony petit theft if you have two or more prior convictions of any type of theft. If you are charged with felony petit theft, you could face up to 5 years in state prison and a fine of up to $5,000.

When the theft rises above $750 in value, grand theft felony charges can be levied. If the goods are valued at between $750 and $20,000, that is considered grand theft in the third degree, with potential penalties of up to five years in prison and a fine up to $5,000.

The statute of limitations for bringing theft charges in Florida is five years, so you can still end up with a charge and a trial date for theft committed years ago.

There are pre-trial defenses that can be used in any criminal case. These involve potentially illegal or unconstitutional actions by police and/or prosecutors that deprive you of your rights.

For instance, if the police search your home and find a reported stolen item, they must do so legally, which generally means obtaining a search warrant. Probable cause is another legal avenue that a theft attorney at DaytonaDefense.com can test. Police must show a probable cause—usually something you said or did, or that someone else said or testified about you—that warrants your arrest.

In the pretrial phase, we will seek to get your charges dropped based on the violations listed above or other factors that may be at work. If we can't get your charges dismissed, then we always try to get the charges reduced and get you the best plea offer possible. Sometimes we can do this by showing the value of the goods stolen is less than what prosecutors are charging.

If your retail theft charge stems from being identified in a lineup, or from a store video or photograph, we can argue mistaken identity. We can also argue that, though you were present when the theft took place, you were not involved. You were merely at the scene, which is not a crime.

Remember, the prosecutors are going to have to prove you had the intent to steal and did so knowingly. If you walked out of the store with items of value but did so without intent—perhaps you were feeling unanticipated side effects of a medication, or rushing to get home after receiving an urgent call from a family member—that can be used to prove that you lacked the intent required to be guilty of the crime of theft.

If this is a first-time offense, we can seek to get you into a diversion program, which in Florida is known as Pre-Trial Intervention (PTI) or Deferred Prosecution Agreement (DPA). By getting counseling, education, and other rehabilitative services, we can possibly have the charges dismissed and help you avoid both a conviction and a criminal record.

Daytona Defense Attorney Has the Experience You Can Trust

Remember, a conviction for even a petit theft of under $100 will go on your criminal record and make it hard for you to obtain employment, housing, professional licenses, and public benefits. The quicker you contact a theft attorney at DaytonaDefense.com, the better chance we have to get you a favorable outcome. If we go to trial, we will bring the full weight of our extensive knowledge and experience in criminal defense to protect your rights and fight for the best possible outcome. You’ll be in good hands throughout the process. If you’re facing shoplifting charges in or around Daytona Beach, contact us immediately at DaytonaDefense.com.