Stories about the opioid epidemic and fentanyl deaths make headlines every day in Florida and throughout the United States. Pharmaceutical companies are settling lawsuits for tremendous amounts of money. Communities compete for supplies of naloxone to save lives. Moreover, states like Florida are cracking down on dealers who sell opioids and fentanyl-laced narcotics. 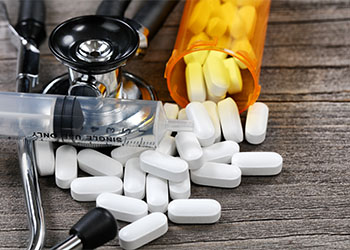 When users die from a drug overdose, pharmaceutical companies, pharmacies, and doctors aren’t facing the most serious charges. Drug dealers and even friends who shared drugs with others may be charged with homicide offenses. Intent is not a requirement for a homicide charge. It doesn’t matter that you never intended to cause another person’s death.

If you are facing a homicide charge related to an opioid or fentanyl death, you need the best defense possible. That is what our team at DaytonaDefense.com gives our criminal defense clients every day in Daytona Beach, Palm Coast, DeLand, New Smyrna Beach, Port Orange, Flagler County, and Volusia County, Florida.

The first step in understanding the opioid and fentanyl problem in Florida is knowing generally how they affect the brain. They bind to receptors in the brain and eliminate pain throughout the body while spurring dopamine production which increases pleasure. The brain controls all the other systems in the body, including functions of the heart and respiration. Alter the chemical composition of the brain and it may cease to communicate with those systems, causing death.

Fentanyl is one of several synthetic opioids. Methadone, hydrocodone, and oxycodone are other man-made opioids. So is heroin. The difference is that fentanyl and heroin are Schedule I controlled drugs, meaning they have no medical benefit and are prone to be abused. Methadone, hydrocodone, and oxycodone are Schedule II drugs. Although they too are prone to abuse, they are prescribed for legitimate medical benefits.

The rampant over-prescription of Schedule II drugs such as methadone, hydrocodone, and oxycodone since 2000 has led to increasing abuse, dependency, and overdose deaths. When these drugs became easy to get due to their proliferation, the use of heroin subsided. However, as states began to crack down on pharmaceutical companies, physicians prescribing opioids, and pharmacies dispensing them, the use of heroin began to rise again. More and more, the drug is often laced with fentanyl which makes it even deadlier. Fentanyl is more than 50 times more potent than heroin, so the combination is often deadly.

The fentanyl high is so powerful and addictive that demand continues to grow. Drug dealing and use is a market economy. The higher the demand, the more the drug is manufactured, trafficked, and used, resulting in more and more deaths. Florida’s crackdown isn’t affecting everyone equally.

How Are Drug Distribution
Companies Charged With Crimes?

In Florida, drug distribution companies, such as pharmaceutical manufacturers and pharmacies, are charged in civil court for contributing to the public health problem created by opioids. They are often charged under the Florida Deceptive and Unfair Trade Practices Act and/or under the Florida Racketeer Influenced and Corrupt Organizations (RICO) Act.

Although certain individuals may be found guilty and sentenced to prison or fined, it will be for charges other than those related to homicide. That means the penalties for conviction are not nearly as severe.

How Are Doctors Charged With Opioid Crimes?

More than 23% of the opioid-related criminal cases against physicians reported by the U.S. news media from 1995 through December 2019 occurred in Florida. The majority of them, however, were charged with drug trafficking, fraud, and money laundering. Only a few were charged with manslaughter and none with felony murder in the first or second degree.

How Are Drug Dealers and Providers
Charged With Opioid Crimes?

For drug dealers and even for someone who brings opioids to share with a friend who dies of an overdose, the criminal consequences are far more serious. Under Florida law, these individuals face murder charges in the first or second degree, not merely drug trafficking or even manslaughter. The burden of proof is only that you distributed the substance and that substance caused the death of a person.

You can bring a gun to visit a friend and if it accidentally discharges, you will likely face a manslaughter charge. If you bring an opioid to a friend and they die from an overdose, you face felony murder charges. A murder conviction can result in long prison sentences, expensive fines, and other devastating consequences. If convicted of murder in the first degree, you face the most severe penalties.

There is little required to convict you for murder in the death of an opioid or fentanyl overdose victim. To fight back, you need an experienced, aggressive, and reliable criminal defense attorney who has represented people like you charged in opioid-related deaths in and around Dayton Beach, Florida. Our team may be your lifeline so don’t wait. Call DaytonaDefense.com today.